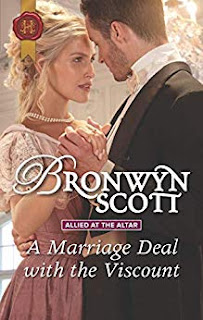 I am so excited for this year's series and I hope readers are, too! This series features four couples who find themselves in marriages of convenience, starting with Conall and Sofia.


'I can protect you.'
But she must accept his ring!
An Allied at the Altar story: after an abusive marriage, Sofia is struggling to find acceptance in Society. So when dashing Viscount Taunton needs her investment for his business, she’s surprised by his strong, supportive nature.
In Conall’s arms she discovers true pleasure. Yet to fully leave her past behind, Sofia must consider Conall’s offer of his full protection – in the form of wedding vows!
https://www.amazon.com/Marriage-Deal-Viscount-Allied-Altar-ebook/dp/B07DLBK4FG/ref=sr_1_1?ie=UTF8&qid=1546106308&sr=8-1&keywords=marriage+deal+with+the+viscount

Want to read an early review of the book? Check out this review from UK reviewer, Frankie Reviews:

Frankie Reviews rated it it was amazing

Shelves: arc-from-author, mills-and-boon-harlequin, victorian, historical-romance,favourite-author
This is a fabulous start to a whole new series; Allied At The Alter, which going by this first book is going to be another brilliant series by a favourite author of mine. This is essentially a ‘Marriage of Convenience’ story, but as ever with Ms Scott’s work there is always a great secondary plot or a twist to the tale. I love that Bronwyn Scott has set this series in the Victorian era, which is such a change from her hugely popular and brilliant regencies, I can say without a doubt that she has pulled a beauty out of the bag with this one.

Conall; Viscount Taunton after gaining the title he now has to deal with the problems that go along with it, which in Taunton’s case means they are in dire need of money. Conall comes up with the most brilliant plan to gain the funds that his family and more importantly the title needs and that is to do what many aristocrats deem as rather vulgar. He plans to go into business!! I know shock and horror, he wants to start trading with the mills with his Alpacca wool, but to do that he needs capital but when he goes to the one man who could set this venture off refuses him point blank he must find another avenue to go down.

I love that about him he is an enterprising, creative and imaginative young man who has a proper head on his shoulders, in fact he rather makes me think of John Thornton from North and South – I think everyone knows how much I love a man who isn’t afraid to get his hands dirty and this is the man. Conall is a very proud man, it does grate that he has to beg but where his family is concerned he will do what is needed. I really, really love him he just wants to do what’s right he is motivated, enigmatic and at times very serious but that just adds to his appeal. Once he gets turned down by a family friend no less he has no other choice than to fall on to the charity of the mysterious but incredibly wealthy; La Marchessa di Cremona.

Sofia has her own reasons to be as mysterious and hidden in the shadows as she is, if found she would face a fate far, far worse then death, which is why she is equally as desperate for this deal with Conall to go well. She is a complex woman, and I love how Ms Scott doesn’t divulge all of Sofia’s secrets in one go, she teases with dropping little clues and subtle hints through out the story. Yes, it is pretty easy to figure out her back story and why she is fleeing, but it’s incredibly satisfying finding out about this woman. Sofia may appear to be an alluring, beautiful, majestic creature from another planet and yes she is, but that is a mask to protect herself, she is pretty damaged, she is vulnerable, afraid and has trust issues.

I adore both Conall and Sofia, as individuals they are tough cookies who are fighting to not just keep their heads above water but to save their family and themselves. But for me they really shine when they are together, they are both immensely intelligent, resourceful, charismatic and proud. You would think that they would be like chalk and cheese, but that’s as far from the truth as you can get they are each others rock.

This isn’t your stereotypical boy meets girl romance, there is intricate layers that entwine some very serious subjects within the story; such as abuse, divorce and a county which is forging a head into a new innovative world. I love Victorian novels, it was a time of change of new ideas and all of that is features in this book. The character’s are engaging and likeable, the two leads off course are perfect but I love the secondary characters too which are fascinating, and fun to get to know, even the baddie is mesmerising.

Overall this is a brilliantly written, original, thrilling, engaging, captivating and page-turning romance that will keep you teetering at the edge of your seat, reading with baited breath as the story unfolds. A great start to a whole new series, one that I cannot wait to dive into again with book two.

A great book and highly recommended!

This was an Arc copy via the author in exchange for an honest review, thank you Bronwyn.

Arrange marriage is so beautiful, as well as join the husband and wife new bonding.