Character inspirations for the Cornish Dukes

This week I got my revision notes back for Vennor Penlerick's story, the very last one in the dukes' series, so I will going into the writing cave shortly for a couple weeks while I tweak this finale to the series into shape. But, before I do, I thought it would be fun to take a look back at the inspirations for the four heroes. It's hard to believe this time last year, the series was just beginning to take shape and now it's out there for readers!  So here's how it began.

Eaton Falmage, Lord Lynford (heir to the Duke of Bude). 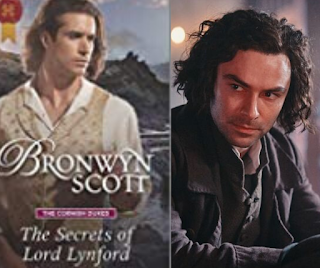 He's meant to be a regional fellow, more concerned with what he can do at home for his people than the glitter of London, and with his own secret to hide, he'd prefer to stay out of Society's eye. While he didn't physically embody Aidan Turner, he did embody some  of the similar attributes of Turner's character, Ross Poldark. So, I started there for some inspiration about Eaton. Fun fact: about three months after I finished the mansucript, revisions and all, I was watching Season Four of Poldark, the episode where Demelza cuts the ribbon for the new school. If you're a Poldark fan, you'll remember that Season 4 and 5 focused on education for the children. I saw that and at first I was like, "Aw, that was my idea to have schools!" (even though, we know historically, there was indeed a big push in the 1820s for schools at mines and at factories by those more civically minded. But then, I was like, 'oh that's so cool to see that story line get reinforced.' 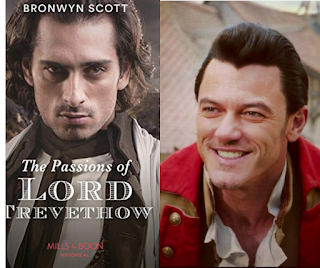 Cassian Truscott, Viscount Trevethow (heir to the Duke of Hayle).
Although Eaton is also an outdoorsman, Cassian is a rugged outdoorsman. He loves beaches and woods and riding and sailing and traveling. So, I definitely wanted someone who had that outdoorsy feel to them and that confidence. Here's my dirty little secret-- Gaston in the live action Beauty and the Beast is sexy!! What makes him unattractive to me are his personality traits and his belief system. But what if, he was good looking and good-thinking? Then, we'd really have something, in fact, we'd have Cassian Truscott. 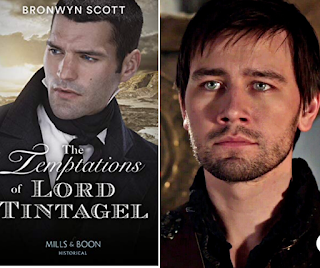 Inigo Vellanoweth, Earl of Tintagel and the heir to the Duke of Boscastle
Inigo was a little trickier. Being raised in this group of young men and in Cornwall, he too loves the outdoors, but he also is very good with investments and he's the financial engineer of the group, partnering with Cassian in the Porth Karrek Land Development Company. And it's Inigo that Eaton calls in to mastermind the plan to save Eliza's mines.  So, for Inigo, I wanted a slightly more refined image that captured both his intellect and Town Bronze as well as his outdoorsmanship. I settled on Torrance Coombs from Reign-- he plays the king's bastard, Bash, whose character embodied a similar combination-- a man who had to navigate the nuances of French Court and all its politics, while also enjoying a robust outdoorsy life. I love how this cover came out--you'll notice that Inigo's cravat is actually tied whereas Eaton doesn't have one at all and Cassian's is rather untied and loose. The tied cravat is a nod to Inigo's polish. Readers will note that Inigo spends considerably more time in London than Eaton and Cassian.

Vennor Penlerick, The Duke of Newlyn.  His cover isn't done yet, but he's meant to be the more classically handsome of the group. He's spent the entire series in Town, grieving the loss of his father, whose death opens the series, and trying to figure out who he is. So, I will leave this space blank for a little while and leave him to your imagination. He's blonde, though, the only blond of the bunch as readers of Lord Lynford will have noticed. Until then...get those imaginations warmed up. HINT: his physical inspiration is Dan Stevens in his Downton Abbey mode.
Posted by Bronwyn Scott at 10:10 AM