Gool Peran! Or Happy St. Piran's Day.  It's not really St. Piran's day as I write this, but a few weeks after.  St Piran's Day is March 5th.  I thought this week I would give us a behind the scenes look at the first meeting of Penrose and Cassian in "The Passions of Lord Trevethow." Their first meeting takes place at the St. Piran's day fair in Redruth, not far from Hayle, where Cassian's family seat is located, and of course Penrose lives in Redruth.

St. Piran, himself, was a 5th century Cornish abbot, and later a saint. He was Irish, and today he is known as the patron saint of Cornwall and of tin miners (which seems to go hand in hand).  In modern Cornwall, a lot of towns have their own St Piran's festivals, like Truro and Golowan, but Redruth is generally acknowledged as the home and founding place of St. Piran's day festivals.  The festivals have changed little over the centuries--consisting of street fairs, fair food, vendors and entertainments. Here's a nice link to a brief story about St. Piran https://www.tregenna-castle.co.uk/the-resort/blog/what-is-st-pirans-day/.  Just a note, a lot of the easily accessed material on the internet, creates the impression that St. Piran's day was first celebrated in Redruth in 2011-- not so. However, there was a hiatus in celebrations and then a resurgence of them in the late 19th century in Cornwall. So, it is possible that I took a bit of license in bumping up the fair to 1824. 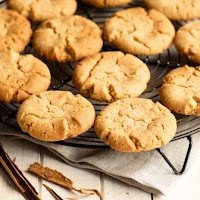 At the fair, Cassian and Penrose eat some fun treats! Cassian is a bottomless pit and can eat all day. One of the first treats he buys for them is a traditional Cornish pasty. In the book, he eats a meat pasty right away upon arrival and then eats a potato pasty with Penrose.  Enjoy the picture and if you're interested in a recipe here's a link. https://www.thespruceeats.com/traditional-cornish-pasty-recipe-435042.  Another treat highlighted at the fair was 'fairings' which is a cookie. https://www.bakingmad.com/recipe/cornish-fairings

This year, which is becoming a historical year (2020), St Piran's day celebrants were encouraged to practice social distancing.