In "Unwrapping his Festive Temptation," my part of the Cornish Christmas anthology, readers meet Cador Kitto, a composer hired by Treeve Penhaligon (Marguerite's hero) to compose a Christmas cantata for Nadelik.  Cador is a local boy made good. Twenty years ago, he left Porth Karrek to study music, courtesy of Porth Karrek reverend who saw his potential, and he's never looked back for several reasons.  In fact, Cador never intended to return to Porth Karrek, but circumstances have conspired against him and now he needs to confront his past in order to embrace his future. 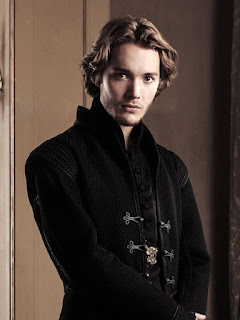 For this hero, I wanted to do something a little different from usual Bronwyn Scott heroes. Cador is not overly tall.  He's 5'9, slender in build, and has flowing, golden poet-hair as I like to call it. Toby Regbo's portrayal of Francis in Reign provides some inspiration for this particular look, a nice blend of a strong character with a poet's looks.

This blend made sense to me. Cador Kitto was a miner's child, who lived in squalid conditions growing up and worked a few early years doing mining work that was often assigned to children of miners to make a few extra pennies for the family. He would not have had the nutrition or the lifestyle habits to have grown tall or muscularly bulky even if it had been in the genes. If anyone is interested in the correlation between height and occupations, here's the citation for an article that chronicles the concept:


Heights and Living Standards of English Workers During the Early Years of Industrialization, 1770-1815

Stephen Nicholas and Richard H. Steckel
The Journal of Economic History
Vol. 51, No. 4 (Dec., 1991), pp. 937-957
It is a JSTOR site, so it's a paid subscription, but it might also open other avenues to pursue to get the same information so I thought I'd pass it on.
Cador is pronounced with the short A sound, but over the years, he's been away, he goes by Cade with an long A, just one of the ways he'd tried to distance himself from his Cornish roots and his past. And it is just one of the parallels to a modern celebrity lifestyle in the 21st century. Cador has some fame. He is a well-known composer, who is currently down on his luck, a prodigy whose hit a rough spot in his late twenties, not unlike, perhaps, a child actor. So, while he's  a celebrity with some laurels to rest on for a bit, he is not am a title. He has not been born to his position, he has earned it and he can lose it, which is a great fear for him, that he might somehow be reduced to what he once was. This too was an interesting and different storyline to pursue instead of the usual nobleman hero.

I hope you enjoy Cador's story. His journey is very much a Christmas journey, a nontraditional hero set against the backdrop of a very traditional season.

Posted by Bronwyn Scott at 5:52 AM