Seduced by the Prince's Kiss is out today! 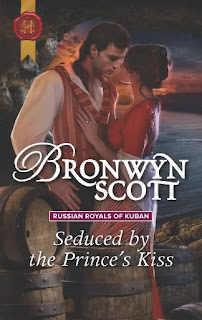 Hooray! Seduced by the Prince's Kiss, book #4 in the Russian Royals of Kuban is out today in North America. The series is complete. Stepan's  story brings all the princes back together one last hurrah, and even Prince Dimitri Petrovich from last year's Wallflower series and Preston Worth. The conclusion of this book brings both series together, which was a fun task. I like it when worlds collide and when characters from other books interact with each other. Don't worry, though, if you missed the Wallflowers, you will still have no problem keeping up with Stepan's story, it's just an extra 'Easter egg' for avid Bronwyn Scott readers.

In this book, everything has come full circle. The immigrant/exiled princes have found new lives, most of them in England. This is highlighted especially by Stepan's choice of 'occupation.'  As a means of protesting economic injustice, Stepan has become a smuggler, what could be more English than that? And what does he smuggle? No surprise here if you've been following the series--Vodka. Remember the vodka tasting Stepan hosts at the club in Illarion's story, "Innocent in the Prince's Bed?" And how about all that samogan the princes drank in "Compromised by the Prince's Touch", Nikolay's story in book #1?

The "I've become English" theme is also alluded to through Stepan's heroine, Anna-Maria, whom readers would have met for the first time through Dimitri in "Awakening the Shy Miss." She remarks to Stepan that she wants to be more English, otherwise what was the point in leaving? But she also struggles with the reality that England and Kuban share some similarities when it comes to the options available to women. So, I hope a little bit of parellelism for the discerning reader, and an illustration of the old adage the grass is always greener on the other side of the hill.  Anna-Maria has always viewed England as the Promised Land, but it's not quite as promising as she'd hoped.

Together, Anna-Maria and Stepan explore their limits and find the freedom they've been searching for in each other as they realize that home isn't always a place, but the people you're with.

I hope you enjoy the conclusion to the Royals of Kuban! This has definitely been one of my favorite series to write.

Bronwyn
Posted by Bronwyn Scott at 8:54 AM