Getting to Know Kuban

Ruslan's book, Awakened by the Prince's Passion, grapples with the storyline  of  the immigrant's return home.  Ruslan's mission focuses on returning a lost princess to the throne of Kuban and it requires him to return with her--something he never thought he'd do. When he left Kuban, he thought he'd left for good.

If you've followed the series, you know already that Kuban is a real region in Russia with some historical significance, and you know that the Kingdom of Kuban itself is fictional. But what kind of place is Kuban in truth?

Kuban is located in Southern Russia. It is the area depicted in red on the map below. The Kuban River  is noted on the map too, the river that Ruslan and Dasha sail up to reach the capital. On the river is also the city of Krasnodar on the map. This is the city of Ekaterinador (sometimes spelled with a Y) mentioned in the story as well. The city was renamed Krasnodar in 1920. 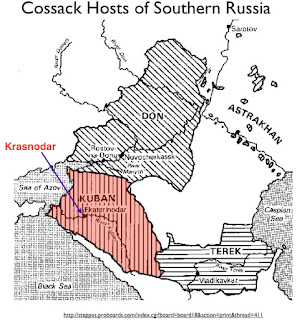 The region of Kuban has a colorful history that I thought gave rise to the plausibility of the fictional kingdom. Consider this political background.

988 Kuban is the site of the Tmurtarakan Princedom, making it a centre of political, economic and Christianity northwest of the Caucasus mountains.


1750s and to the end of the 18th century the Caucasus and Crimea became the place where the interests of the Russian and Osman (Turkish) empires clashed. This sets up the real historical need for Russia to settle Kuban if it wishes to hold the area against the Ottomans. So, the story Illarion tells in "Innocent in the Prince's Bed" of his family choosing to migrate from St. Petersburg to Kuban in order to earn the Tsar's favor is not entirely fiction. History shows that many Russians migrated to hold the land against the Turks. For example, the Don Cossacks brought 3,000 Cossacks into the territory (as mentioned in Nikolay's story, Compromised by the Prince's Touch).  This settlement and installation of Russians in the Kuban area is solidified after the Russia-Turkish war of 1768-1774. Russian wins but Turkey still has influence in the region. This continued influence sets up the storyline in "Awakening the Shy Miss," when Kubanian Prince Dimitri has an arranged political marriage to a Pasha's daughter to hold the peace between Kuban and the Ottoman's on the border. 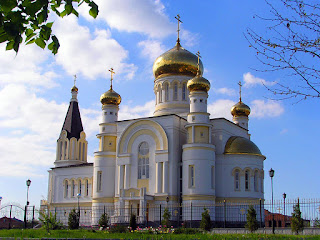 Another significant development is the 1783 annexation of the Crimea and Taman peninsulas, and the right-bank of the Kuban River into the Russian Empire by Catherine II. Once annexed, these lands needed to be held. In a move, meant to look benevolent, Catherine bequeathes these areas to the Black Sea Cossacks and other Cossack groups. In return for these lands, the Cossacks are expected to hold the territory in safekeeping for Russia. This region becomes the buffer between Russia and Turkey. in 1793 the Cossacks found the city of Ekaterinador (Krasnodar) as the center of their current regional empire.
In Ruslan's story, the capital of Kuban is a bit further up river than Ekaterinador. It features white buildings and gold domes just like the church pictured above. Dasha remarks on the brilliance of the city coming into view from the barge.
Physical Geography
In all of the books, there is reference made to the wildness of Kuban.  Even in Dimitri's story, "Awakening the Shy Miss," in the Wallflowers to Wives series, Dimitri regales Evie with stories of cold rivers, rugged mountains and wolves. 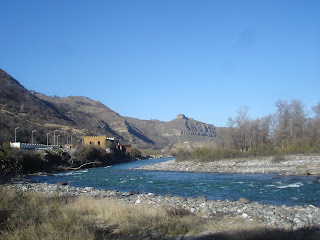 The Kuban River is sourced from the glaciers of Mount Elbrus in the Caucasus Mountains and eventually comes out at the Sea of Azov--seen in the map above. I should note that technically the Kuban River is not known for freezing over because of the climate it encounters. However, there are references in series to fabulous skating parties along the river during the winter, so that is a bit of fictional license I have taken.  To the left, is a modern day look at the Kuban River, complete with a hydroelectric building.

I hope you've enjoyed our first look at the land of Kuban where Ruslan's adventure is placed and little background on what fed my imagination about the Kingdom of Kuban.

Posted by Bronwyn Scott at 1:33 PM