Pleasured by the English Spy is out for the month of love (Feb.) 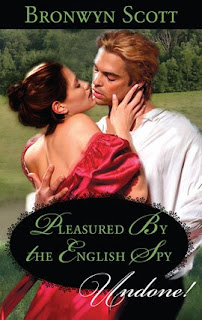 Here it is! Andrew Truesdale's story. He's one of Julian Burke's friends from Libertine Lord. He meets his match in Italy following up on one of Valerian St. Justs missions.
Raised in Italy until he was 15 by his grandparents, Andrew is a natural choice when the British delegation in Vienna sends someone to Florence to ferret out the latest nationalist plot for revolution.
His mission is simple; if there is a revolutionary plot, stop it. But things become complicated when his efforts lead him to the Villa of the Breezes and into the arms of Olivia, another English expatriate like himself. Olivia is a woman of passion, free from the strictures of society, free to act on her passions. But when Andrew discovers her cousin's role in the revolutionary plot, he begins to wonder if Olivia used their budding relationship to protect her cousin, or is their love truly one of a kind? The dilemma forces Andrew to reconsider the line between duty and pleasure and the risks he'll have to take in order to follow the dictates of his heart. Can he find a way to serve both his country and his passion?
Posted by Bronwyn Scott at 7:53 AM

Ms. Scott...I have been looking in various stores, Borders, etc. for your books for some time now versus buying online. Is there some store I'm missing that carries your books?

Anon,
The easiest way is to head to the Harlequin website www.eharlequin.com. From there, you can find the links to all of the books she has put out including the e-books.