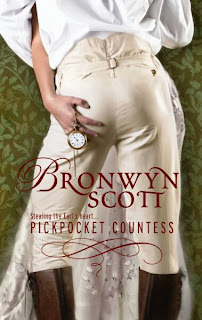 Here's a review by Katherine T. Thought you'd all enjoy reading it.

Stars! ~~~ Ms Scott had me enchanted with this story right from the opening scene!

Ah, I love this cover! ~~~ So much so I had to make it larger than I normally post! ~~~ What do you think? ~~~ Wouldn’t you just love to be that Pickpocket?
...
It’s 1831 and the Industrial Revolution is picking up speed in England, bringing with it unrest amongst the working class. Brandon Wycroft the fifth Earl of Stockport needs to build a textile mill in order to protect his earldom’s financial future. His plan is to set precedent with a safe mill, one that doesn’t employ children and the workers receive a decent day’s wage. But there is opposition to the mill, and the men who have signed up to invest have found their homes burglarized. “The Cat” of Manchester is quickly becoming notorious for his escapades leaving no house of distinction untouched, except for the Earls. But that’s not exactly true. The Earl hasn’t been untouched by “The Cat”, in fact, he’s been thoroughly touched! He’d caught the devil in the act, and to his amazement “The Cat” is not a HE, she’s a SHE! And with one startling and oh so arousing kiss, the Earl finds himself in a predicament; does he hunt and jail the thief or does he bed and wed the temptress!

Ms Scott had me enchanted with this story right from the opening scene! Awesome beginning that created a very sensual fun tone to the book. Brandon is a good man, trying hard to do good for those under his protection as Earl. He’s frustrated that his political efforts haven’t done more but he continues to fight for the people. When he learns that “The Cat” is indeed a living Robin Hood taking only what can be used to help the disadvantaged, he feels humbled. The Cat, Nora, is sassy and very smart, she’s Brandon equal all the way. She recognizes immediately the danger he’s in, esp. if the fact that he’s aided her should come out. With ruthless greedy men out to stop “The Cat”, both Nora and Brandon have to face challenging questions about just how far they will go to save the other. The heat between them just jumps off the pages, and I adored both Nora’s and Brandon’s most wicked thoughts! Very well done, and I do hope that Ms. Scott’s next book will be about Brandon’s best friend and ally Jack and Brandon’s wild child sister Dulci. If so, I’m looking forward to another “romp” of a good time!
Posted by Bronwyn Scott at 9:04 AM